Taskforce Chair Bali Haque (far left) and Ezra Schuster, Director of Education Bay of Plenty Waiariki, (far right)  met with secondary students in Rotorua to talk about the Tomorrow’s Schools review. The students debated the strengths and weakness of the current school system and discussed new ideas for improvements. 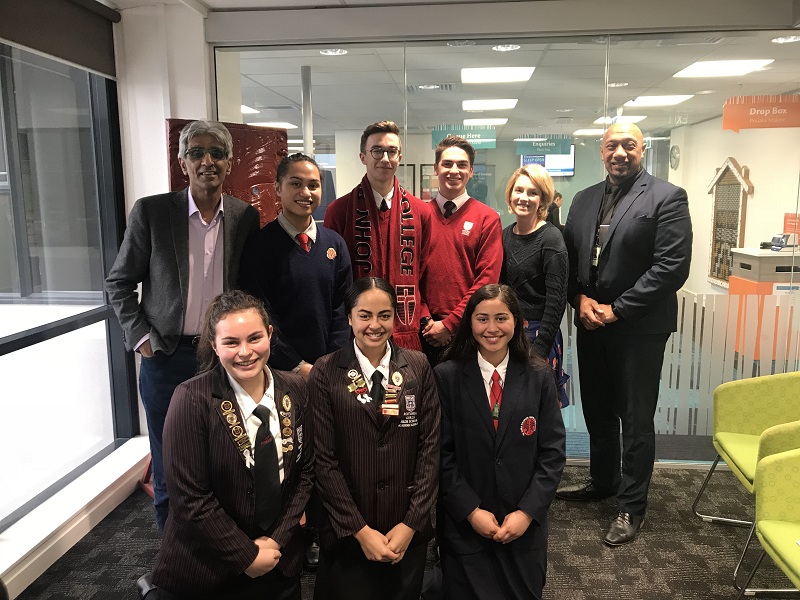 Members of the Tomorrow’s Schools Review Independent Taskforce met with parents and education specialists in Wellington.  The group told the Taskforce about the importance of children having a strong sense of belonging at school and the need for more resources and specialists to support student wellbeing and learning. They also discussed better support for boards and a forum for parents to go to with complaints. Taskforce member Professor John O’Neill met a group of employers, trade training and tertiary providers in Hamilton. They discussed the need for the schools to help students to develop their soft skills, rather than having a narrow emphasis on academic outcomes.  The group said that greater support is needed for students during transition points (school to work, or from secondary to tertiary education) to help those at risk of falling through the cracks. Taskforce member Barbara Ala’alatoa (top row, second from left) met with the staff at Sutton Park School in Mangere. The staff told Barbara that parent voice needs to be strong in schools, schools need to be able to make decisions that are important to their community (such as bilingual education provision) and students’ heritage should be alive in their school.

Amongst many other things they also suggested compulsory professional development for Boards of Trustees and having specialists to manage property and finance for the BoT.

Taskforce member Barbara Ala’alatoa (centre) met with representatives of the New Zealand Federation of Multicultural Councils. They talked about the need for better representation of all cultures on boards of trustees and how the board environment can be intimidating for some parents.

They also discussed the need for more community engagement by schools and for a more culturally responsive governance structure, for example by connecting with existing multicultural councils and better training.

Taskforce member Barbara Ala’alatoa (second from left) met with staff from Homai School. Staff reflected and shared some of their experiences with Barbara. 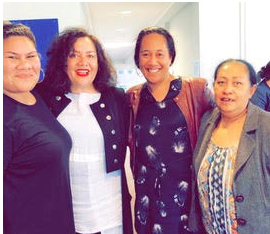 Taskforce member Professor Mere Berryman (seated, second from left) met with a group of Year 9+ champions in Gisborne.  These champions work with at-risk young people to help them stay in education. 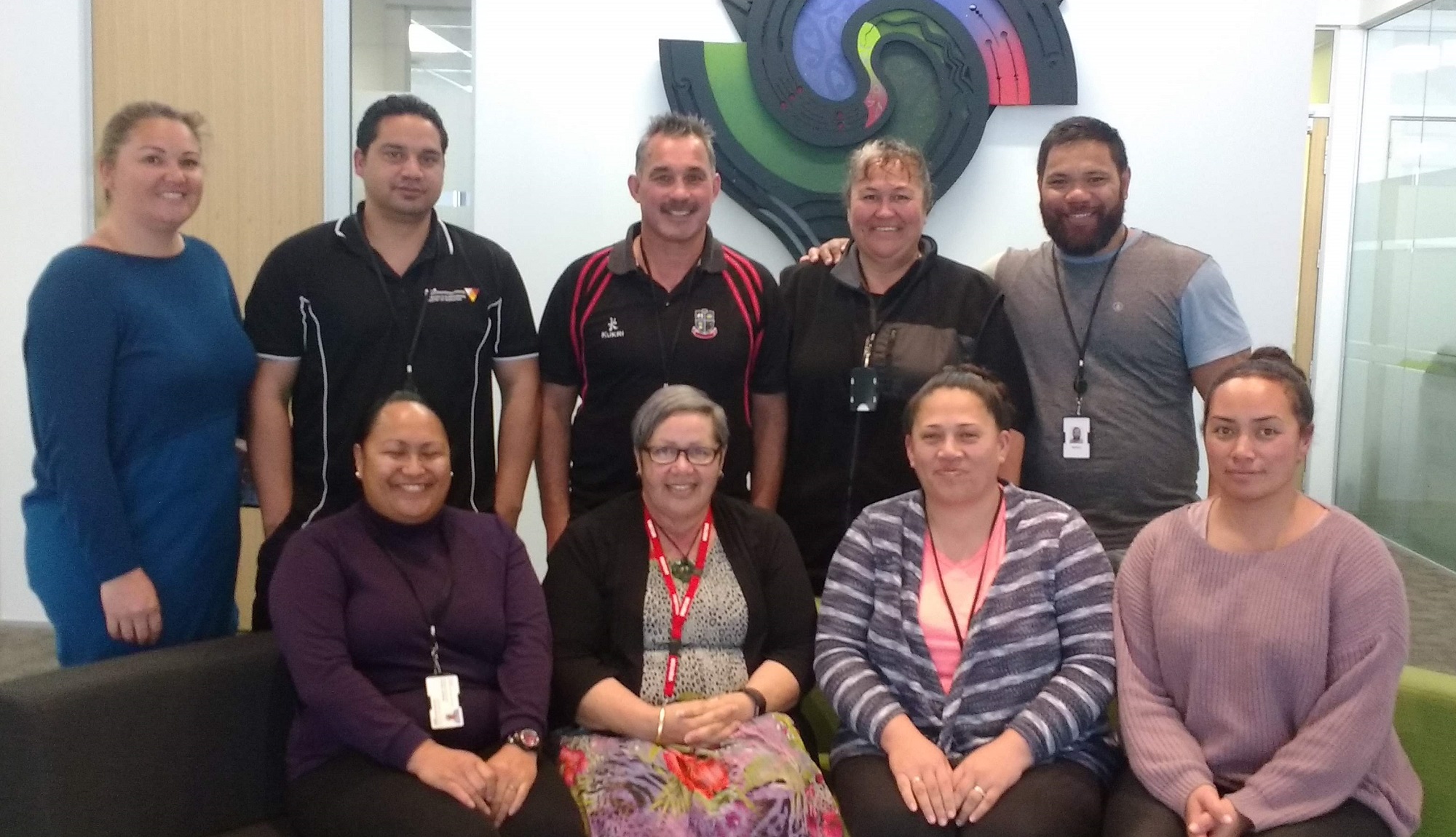 They told Mere about the challenges these young people, and their families, face in remaining engaged in education. They discussed the need for young people to have allies to address these barriers, through schools and the system as a whole.

Taskforce member Barbara Ala’alatoa (centre) met with teachers, trustees and support staff at Birdwood School. They told Barbara that they like the community input into schools but that Maori and Pasifika involvement needs to be sewn in. They talked about the need for all schools to have a home-school partnership, more learning support including quicker assessments of students’ needs, and for more culturally responsive training for teachers.

They also discussed sharing a board across a group of schools (such as a Kahui Ako), as it would give a bigger pool of skills, and that boards should be able to focus on students rather than finance and property.  More student voice is needed on boards and in key appointments such as the principal. The students told Mere about the importance of connectedness between home and school. They talked about feeling they are able to be whatever they want to be when they have teachers who understand them and school leaders who make things happen.

Taskforce Chair Bali Haque (far left in photo) was in Napier to meet with leaders and across-school teachers from three Napier Kāhui Ako. The group told Bali that the Kāhui Ako model is leading to more information sharing, collaboration and connections at a community level but the implementation has been challenging. The Principals told Bali that the requirements on teachers to prove competence to the Education Council every year, regardless of their ongoing performance, is a burden. Suggestions for change included more mentoring and leadership support for principals and moving responsibility for property off individual schools (but not going back to a centralised system). They also said specialist subject advisors would help the provinces get access to best practice.

Taskforce members were at the NZ School Trustees Association conference meeting with trustees and principals. Here is Bali Haque, Mere Berryman and Barbara Ala’alatoa with one of the focus groups they heard from.

They heard about the different experiences of trustees and the opportunities and challenges of the current system. Key themes were the inconsistency in capability across boards, and the need for greater support for both trustees and schools.

Taskforce Member Barbara Ala’alatoa met with focus groups of Pacific and Maōri parents, board members, teachers and community members from Dunedin. The groups discussed issues of school governance, management and accountability, cultural competencies for leaders and teachers, and the joys and challenges of educating the next generation in Dunedin. They told Cathy of the educational barriers they observe Maori students face in the South Island, and shared experiences of challenging cultural environments at school. They talked about effective programmes they ran and the opportunities to help overcome these challenges.

As well as meeting with school leaders, teachers, support staff, students, parents, iwi representatives and other stakeholders in the education system, the Taskforce have also been talking to the Ministry of Education’s regional staff.   Here is Taskforce Chair Bali Haque (far left) and Taskforce member Barbara Ala’alatoa (far right) with some of the Auckland team. The regional staff are the main interface between schools and the Ministry, and they have been able to tell the Taskforce about some of the challenges and opportunities they see for the schooling system to better meet the needs and aspirations of all learners.

YouthLaw told them that the right of children and young people to an education is often lost in the suspension process, many young people feel powerless in the schooling system, and the variability - school to school, suburb to suburb, and between cities in length of suspension from school. They said that in some cases suspensions have been extended for months in others a few days.

“You can’t go through an appeal process when you’re removed from school – you have the right to appeal a red card in a football game yet you don’t have this right in the schooling system.”

Taskforce member Professor John O’Neill (far left in the photo) met with attendees of the Learning Disabilities Association New Zealand conference on the weekend. Here he is with one of the focus groups he heard from.

There was a lot of discussion about the need for better, and more frequent, teacher education and training on learning disabilities. There were also some comments about the structure of our schooling system including this: The Tomorrow’s Schools model of self-managing schools creates a lot of duplication, as there needs to be expertise in various areas (SENCOs, etc.) in each school. There needs to be clustering to support greater consistency and avoid reinventing the wheel.

And one on the impact of competition: Tomorrow’s Schools created a competitive environment between schools. Schools now spend money on media advertisements and promotion which diverts this money away from uses that support the existing students at the school. The competitiveness doesn’t fit well with a model of collaboration.